Warning: Use of undefined constant SINGLE_PATH - assumed 'SINGLE_PATH' (this will throw an Error in a future version of PHP) in /home/customer/www/loveabz.com/public_html/wp/wp-content/themes/loveabz/functions.php on line 176
 love.abz

But besides the birds and the dust and my driver body not much. 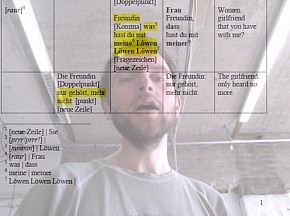 What happens when nothing happens?

“Translation suggests contact with the incomprehensible, the unknowable, or the unfamiliar, that is, with the foreign, and there is no awareness of language or meaning until we come across the foreign. First and foremost, the problematic of translation is concerned with the allocation of the foreign.” 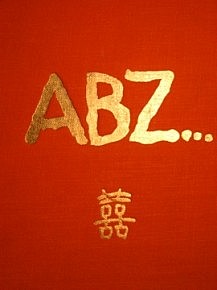 from A tree does not make a well-formed sentence (Sennrich, R.; Williams, P.; Huck, M.)

“Writing unfolds like a game [jeu] that invariably goes beyond its own rules and transgresses its limits. In writing, the point is not to manifest or exalt the act of writing, nor is it to pin a subject within language; it is, rather, a question of creating a space into which the writing subject constantly disappears.”

“It is the task of the translator to release in his own language that pure language which is exiled among alien tongues, to liberate the language imprisoned in a work in his re-creation of that work.”

Walter Benjamin: The Task of the Translator (trans. Harry Zohn)

“It is not enough, however, to repeat the empty affirmation that the author has disappeared. For the same reason, it is not enough to keep repeating that God and man have died a common death. Instead, we must locate the space left empty by the author’s disappearance, follow the distribution of gaps and breaches, and watch for the openings this disappearance uncovers.”

“Translational symmetry cannot be obtained at the surface level precisely because such symmetry cannot be found at the level of Tagore’s ‘associations’, Benjamin’s ‘connotations’ and Frege’s ‘colourings and shadings’, or what can be called the cultural depths of language. Postmodern approaches to the question of translation valorize this limit, whereas modernity we can recognize, thanks to postmodern interventions, effaces the limit. The effacement of the limit, through the mediation of a metalanguage, in postcolonial terms, is constitutive of translational violence.”

Saranindranath Tagore: The Possibility of Translation

“In saying this, I seem to call for a form of culture in which fiction would not be limited by the figure of the author. It would be pure romanticism, however, to imagine a culture in which the fictive would operate in an absolutely free state, in which fiction would be put at the disposal of everyone and would develop without passing through something like a necessary or constraining figure. Although, since the eighteenth century, the author has played the role of the regulator of the fictive; a role quite characteristic of our era of industrial and bourgeois society, of individualism and private property, still, given the historical modifications that are taking place, it does not seem necessary that the author function remain constant in form, complexity, and even in existence. I think that, as our society changes, at the very moment when it is in the process of changing, the author function will disappear, and in such a manner that fiction and its polysemous texts will once again function according to another mode, but still with a system of constraint – one that will no longer be the author but will have to be determined or, perhaps, experienced [expérimenter].”

“As the computer enlarges its range of action, human expression has been increasingly shaped by collaborative systems of authorship. These systems can be defined as computer systems that attain autonomy or semi-autonomy in the structuring of complex signs. Computer systems are able to organize information into highly complex clusters and may eventually surpass the human ability to generate original artworks. The prospect of artificially programmed ‘authors’ challenges artists’ identities as they have been traditionally defined. In the process, a series of questions emerge. How are artists and writers reacting to forms of artificial intelligence, media technology, and software, that can be seen as new ‘authors’? How do theoreticians, historians and critics evaluate the authoring of meaning created by computer programs? Is the human mind now being challenged to supersede the creative abilities of technomedia and electronic systems? What becomes of artists when artificial processes are prioritized over the human production of meaning?”

“Is it possible to isolate and juxtapose [languages] as individual units, like apples, for example, and unlike water?”

“Note that code, along with the ‘easy and useful communication’ it enables, happens in the basement (at the foundational level), and not, as in Walter Benjamin’s essay “The Task of the Translator”, at the transcendent level, where translatability is guaranteed by the ultimate power of God. For Weaver, code resides in the basement because it functions as the man-made linguistic practice capable of undoing God’s disruptive fracturing, at the Tower of Babel, of an ur-language into many languages. In Weaver’s analogy, men get back their own not by building the tower higher but by discovering the common basement in which they can communicate freely with one another.”

‘The issues translation criticism has engaged—the whole body of work on the subject in philosophical, historical, and cultural analysis—are still relevant and necessarily present in this new technological moment. For example, machine translation assumes a fixed position for target and host languages, but as Venuti has argued, the complexity of translation practice in a global context requires our recognizing that “domestic” and “foreign” are shifting, variable, and mutually constitutive categories. Machine translation research also tends to suppose that linguistic knowledge (grammatical rules, idioms)—as opposed to the extra-linguistic—is the basis for all translations, which places it at odds with Spivak’s articulation of the critical and ethical pitfalls of privileging grammar over rhetoric. Without listening to the rhetoricity of the language of the Other, which involves an erotics of submission, she argues, one simply imposes a grammatical structure onto the text and effaces its voice and singularity. Following Spivak’s critique of the ethnocentricity and “law of the strongest” that compels the translation of non-European texts into a “with-it translatese,” Venuti has also called for a translation ethics of difference, a respect for “the foreignness of the foreign text,” rather than an “ethics of sameness that hews to dominant domestic values,” domesticating the foreign within state, or standard, language.’

The relationship between human writer (speaker) and the mechanical agent (transcriber) has been shaken loose to the point where the simple subject-object or user-tool dichotomy is strained. As an outcome of a four-way input-output-input loop, the computer has in effect become the fourth writer, which the three other writers are responding to by either going along with or resisting its influence or intervention, its “input.” The process is exploiting the gap that is likely to remain in natural language processing no matter how sophisticated the statistical approaches – with complex algorithms and massive linguistic databases – are to become.

“What is most problematic about the conventional conception of translation is that, due to its inherent metaphysics of communication (Nancy, 1991), it presents translation as a process of homogenization and of establishing equivalence. But translation always inscribes itself in the social topos of incommensurability and difference, and what I specifically call cultural difference, to which translation is a response, is anterior to and fundamentally heterogeneous to the conceptual difference of species, the difference between particularities. Translation articulates one text to another, but it does not mean that translation merely establishes equivalence between two texts, two languages or two groups of people.”

“Writing ceaselessly posits meaning but always in order to evaporate it: it proceeds to a systematic exemption of meaning.”

Roland Barthes: The Death of the Author (transl. Richard Howard)

Experimenting with speech recognition in Finnish for the first time.

“[-] the translator cannot be designated straightforwardly either as I or you: they disrupt the attempt to appropriate the relation of the addresser and addressee as a personal relation between the first person and the second person. The translator cannot be the first or second person, or even the third ‘person’ undisruptively. Ineluctably, translation introduces an instability into the putatively personal relations among the agents of speech, writing, listening and reading. The translator is internally split and multiple, devoid of a stable position. At best, they are subject in transit.”

“It seems that at the present state of machine translation, one does indeed have to choose between getting either the form or the meaning right. In the present form, however, we can already find good translations, as a sort of found poetry (Drury, 2006), by translating a large quantity of text, whether poetic or not.”

The basic idea was to feed back into the system whatever it had “coughed up” and have it translate it again, numerous times. Using copy-paste, I simply moved a section of text back into the translation box, inverted the source and target languages, and with a click of the icon had GT translate its English translation of a scene back into Finnish—and then back into English again. The result was a cyclical string of variations in which GT kept making changes to each version, debating certain phrases up until at least the fourth or fifth variation. After that the translation began to “settle down”, stabilize, with changes becoming increasingly marginal or, in some cases, non-existent.

“[-] There is no correct text, no final text, no original text, but only texts that are different, drifting in their like differences.” (Joseph Grigely, Textualterity, 119)